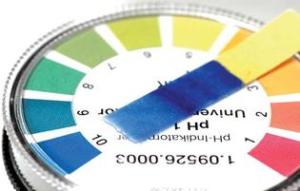 There have been countless variations of the ‘acid alkaline diet’ over the years, each of them based on the theory that the root of modern dietary problems (such as obesity, some cancers and heart disease) is in our overly acidic bodies as a direct result of Western ‘acidifying’ diets.

Favouring ‘alkalising’ foods to balance the body’s pH has even crept into other diet plans, to mention in overpriced juices and waters retailed to health conscious people worldwide.

The acid alkaline diet is based on the theory that foods like dairy, meat, grains, egg yolks and processed foods increase the acidity of our bodies, and therefore we should balance this carefully with an alkaline diet of mainly plant foods.

The idea is that many diseases, including cancer, thrive in an acidic environment, so if our bodies are alkalised, no more disease! It’s all a nice idea, but I, for one, am not convinced.

It’s fairly obvious that increasing our consumption of fruit, vegetables, wholegrains and legumes will be beneficial for our health, as will cutting down on processed and junk foods, so in that sense the diet may have some value. But my main issue with the plan is that it’s just physiologically flawed.

But aren’t all vegetables good for you?!

The problem with the claim that we need to be alkalising our bodies, much like the problem with the detoxing craze, is that our bodies already do a great job of naturally regulating the process through organs like the kidneys, lungs and liver. Basically, it’s just not necessary, and there’s close to zero evidence in its favour.

An interesting feature of the diet is that followers are often encouraged to ‘test’ their body’s pH by means of litmus paper, (pH test strips) something that may appeal as ‘results’ can be viewed along the way. The flaw in this, however, is that the pH of saliva or urine is in no way correlated to that of the blood.

Besides, the outlandish idea that the food we eat may influence the blood pH is just not viable. While it’s true that our food might indirectly alter the pH of our urine, the blood is tightly controlled, and generally only serious conditions like renal failure could alter its acidity.

Finding any research on the topic of acid/alkaline diets is an arduous task, and those studies that do reflect favourably on the diet are limited to those conducted in a lab, as opposed to any long-term studies on people.  The one reputable study I did come across sought to investigate whether or not an alkaline diet prevented bone loss in the elderly, compared to an acidic diet.  No benefit was shown, and it was concluded that inadequate protein (mainly from animal products, categorised as an acidic food group) is more of an issue than excessive protein for bone health in the elderly.

Unsurprisingly, the acid alkaline diet was voted the second worst diet of 2012 by the Dietitians Association of Australia. All in all, in the diet is unnecessarily restrictive, meaning you could be missing out on vital nutrients, and has no scientific basis.